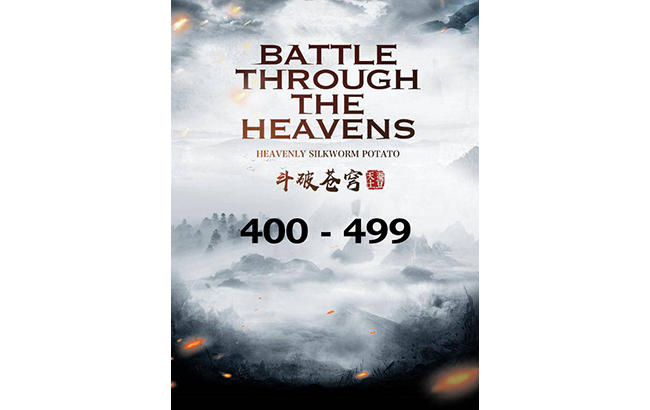 A group of red shadows, like a raging flood, whizzed past the forest. Their dense, bloody, aura caused some of the low ranked Magical Beasts, which were out looking for food, to fear coming any closer. They could only use their frightened gazes from afar as they watched the group of people as they ran pass.

A short while after that group of red-colored humans had rushed past, another black-colored shadow leaped and appeared from in between the trees. His body flashed and stopped at a tree branch before lifting his head, overlooking the red-colored group of people who had their heads lowered as they ran wildly. He could not resist frowning. In a soft voice, he said, “If I continue to delay like this, Fan Lao might really come chasing…”

Two groups with a great disparity in numbers rushed through the mountain forest, with one at the front and the other trailing behind. The distance between them did not exceed a hundred meters.

Xiao Yan remained close behind the group in front, quietly counting the time in his heart. It continued in this manner for a couple of minutes before he finally could not endure any longer. His feet violently stepped on a tree branch. His speed had just soared when he suddenly realized that Fan Ling’s group in front had actually stopped. His heart leaped as he quietly reduced his speed and sneakily landed on a tree branch before he carefully approached.

In an empty clearing within the forest, Fan Ling waved his hand and reduced the speed of the group. His face was solemn as he watched a Blood Guard in front whom he had sent to scout ahead. He coldly asked, “Is there some activity in front?”

“Junior Sect Leader, there are signs of people on the mountain path in that direction. After careful investigation, it appears to be people from the ‘Black Skeleton Tomb’.” The Blood Guard knelt on one knee as he respectfully reported.